One of my hobbies i recently began is buiding tube amplifier. Here are some amps i built.

This is not an amp but is a pedal for an electric guitar. It makes a distortion sound for rock'n roll. This is a copy of the classic distortion pedal of "Fuzz Face" made long time ago in 60s. Jimi Hendrix used it with the Vox Wah pedal. I use two silicon transisters instead of germanium but those 2SC1815 and 2SC1071 are discontinued long time ago, so they're not available and it makes the pedal special. Those have low hfe which is suitable for getting great distortion sound. In fact, it sounds really nice and I used it for my gigs many times. And once in a while I even sold it for 100$. Also, I found my sketch of the circuit layout shown below so that anyone can make it themselves.

This is a small practice amp for my home in Sweden. My design polycy of building amplifier is little weird, I first choose the personnel of tube names regardless of circuit. I insist the set of tube names that should sound nice to me. And I like this 6AQ5-6AQ5. You know, 6AQ5 is a miniature power tube which is equivalent to 6V6GT. I use this power tube at pre-amp section, so it's unusual. Although the noise level is relatively high because of the pentode used as pre-tube, the amp sounds really nice.

Now, I work and live in a small town of Sweden (Visby). This is an amp i built in japan and put it in a suitcase. It has no power and heater transformer in order to reduce its weight. I use two 50BM8 with one-knob tone and a master volume to produce both clean and crunch all the way to heavy distortion so called "Woman tone". Because it uses tarnsformer-less circuit, actually it's dangerous because one of the two AC power line is directly connected to the chassis! It could shock you. But in here, I use another transformer to convert 230V to 100V, so it's no problem.
schematic

300B single ended King of Amplifier 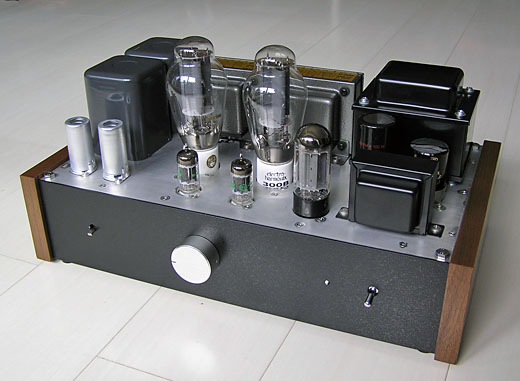 This is a very luxury amp that i made for my friend "Mr. K". He's a rich guy and ordered me this regardless of expense. So i used famous 300B as power tube and interstage trasformers with great apperrance. It also has CR-type equalizing pre-amp for vynil record play.
schematic

2A3 single ended stereo amp for a blues bar "Terraplane" 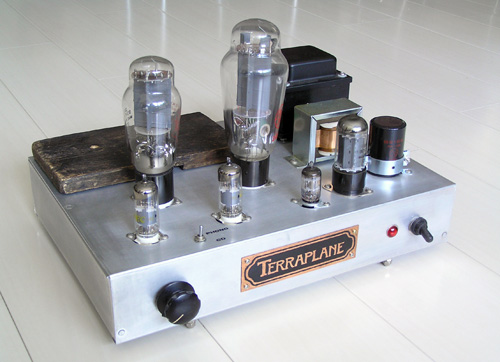 This is the amp that  i presented to the blues bar "Terraplane" in Shibuya. I know the owner very much and have been a long time customer. I gathered available componetns in my junk box to make this, however this amp sounds awesome.
schematic 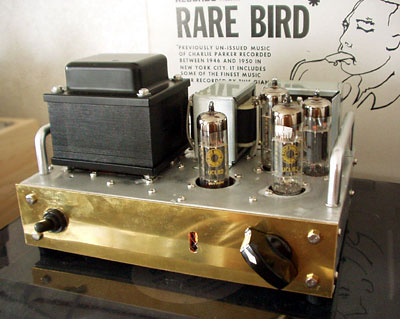 This is my first custom-made amp. My friend asked me to build the one. Although he already has a high power solid-state amp (240W !) that he uses as main audio equipment, he said he wanted to have a more rough & wild tube amp. I designed and assembled this for him. I use 4 cheap 50bm8s in a push-pull circuit and obtain 8W+8W output power.
schematic 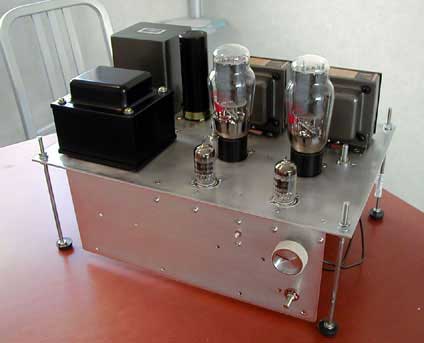 This is a high grade tube amp that i myself designed. I use famous direct heating triode 2A3 as a single ended power tube and 12AU7 as a driver. It uses big transformers and a choke, so it's big and very heavy (12kg) and also cost a lot (still cheaper than buying one though..)
schematic (amp)
schematic (power) 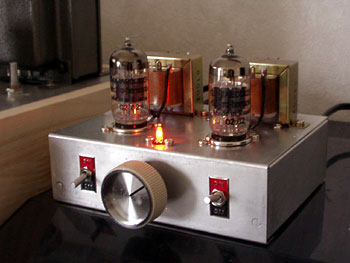 I designed & bult this for my bed room listening music quietly at night. I use 12AU7 as a power tube that normally used as a driver tube. Output power is only about 0.2W but it's loud enough for the use in the bed room.
schematic 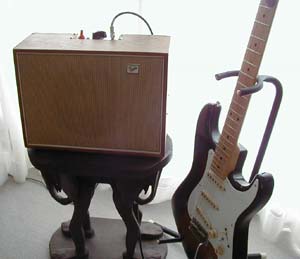 I built this small guitar amp after a Fender Champ. It's loud enough for using in a very small night club. Usually i plugg in my Stratocaster to this amp and practice at home.
schematic 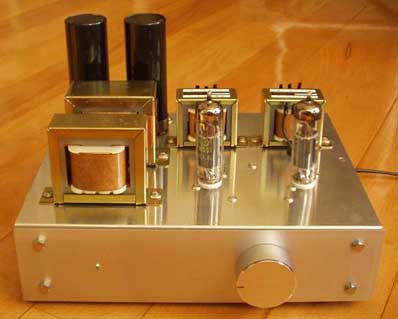 This is the very first amp that i built about 2 years ago. I took the schematic from an internet site. STC (super triode connection) is a very unique way of using triode & pentode in a special connection between two. This sounds very good and has been working as a main amp of my audio equipment in my home for more than a year. Recently the 2A3 amp took over this one.
schematic